The workforce within the Benjamin William Mkapa foundation together with their families, friends and Institutional partners decided to commemorate the Foundation 10 years anniversary, by donating blood to save lives of many people in need. The exercise was carried at the Muhimbili National Hospital on 18th March 2016.

This half a day event which took place at Muhimbili National Hospital, was joyfully participated by more than 30 people that were felt the urge to donate at least 500mls of blood each to be utilized by patients. Accompanying the staff of BMF were spouses/partners, family friends as well as Institutional supporters. Some staff from Montage Limited and Resolution Insurance were amongst those that donated blood on this day.

Speaking during the event, the CEO of BMF Dr. Ellen Mkondya-Senkoro, said that the Foundation will be commemorating a decade anniversary since inception on 13th April 2016, hence they have decided to give back to the community as staff by donating blood in an effort to reduce the shortage of blood in Tanzania. The blood is essential for human life and it is noted that many patients are in need of it such as those suffering from Cancers, undergoing surgeries, women giving child birth, children suffering from many diseases and people who encounter accidents and trauma.

“According to the statistics its shows that Tanzania needs 400,000 – 450,000 blood units per year and the available is 38%.  Therefore 62% unit is required to overcome the shortage, hence we felt the urge to also come and join effort in reducing this shortage” said Dr. Ellen.

Dr. Ellen also mentioned that BMF has been supporting the Government in strengthening regional hospitals laboratory through the financial support of Abbott Fund. “In ensuring there are quality laboratory services within the country, through the financial assistance from the Abbott Fund, the Mkapa Foundation have innovatively recruited more than 129 laboratory technical staff all over the country. Among them, 15 are placed at the Muhimbili National Hospital. We are happy to see, some of them are these ones serving us here today” said Dr. Ellen.

The head of Damu Salamaa unit in Muhimbili Hospital Hilda Maya congratulated and thanked BMF for the support they have provided to the unit. In her statement she said the shortage of blood is still a greater challenge at both regional and national level.

Head of Damu Salama Unit in Muhimbili Hospital Hilda Maya giving a word of appreciation to the BMF team for donating blood.

“We do encourage that all those who have donated blood today should be voluntary and registered blood donors, thus continue with donating blood every quarter or twice a year. We trust you will now be reliable donors of blood”. Said Hilda Maya

Moreover this blood donation activity was also carried out simultaneously with our team in the field offices.

The Chairman of the BMF Board of Trustees, Amb. Charles A. Sanga together with BMF staff before departing to the Muhimbili National Hospital to donate blood 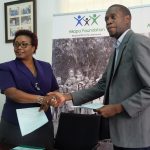 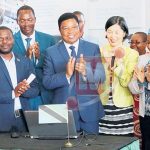 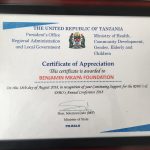