In its endeavor to supplement the Government of Tanzania’s efforts in strengthening health system in underserved regions, the Mkapa Foundation has invested Tshs 1.9 Billion to curb the crisis of Human Resource for health and improvement of new born and maternal health in Simiyu region. The Tshs 1.9 Billion was invested in construction of 28 health workers staff houses and 2obstetric theatres in the region.

The handing over ceremonies held in Busega and Bariadi District Councils on the same day of 20thDecember 2016 were graced by Hon. UmmyMwalimu (MP), Minister for Health, Community Development, Gender, Elderly and Children (MoHCDGEC) as the guest of honor. Accompanying the Minister were regional and district leaders, Members of Parliaments of the beneficiary constituency, contractors together with representatives from corporate companies who are BMF’s financial sponsors. Hon. Ummy Mwalimu, Minister of Health, Community Development, Gender, Elderly and Children listening to a health worker (not in the picture) on how the new theatre will be operating.

The first event took place in Bariadi District Council by handing over 2 constructed theatres respectively located in Ngulyati health centres (Bariadi District Council) and Igalukilo Health Centres (Busega district Council) with an overall cost of Tshs 435 million. The theatre of about 245 square meter is well designed to accommodate 2 theatre operating beds and all essential functions of a theatre including staff comfort. Addressing the guests who attended the ceremony in Bariadi, Hon. Ummy Mwalimu said that, the Government of Tanzania is still registering  high maternal death which is She commended the Mkapa Foundation for their unique work on improving health infrastructure and was pleased with the model theatre that was constructed in this rural health centre. She further reiterated the commitment of the Government in strengtheningthe Primary health care services with adequate drugs and commodities for better maternal and child care.

Dr. Ellen Mkondya-Senkoro, CEO of BMF, in her remarks said that, the theatres have been constructed through BMF’s signature program known as Mkapa Fellows program, which is funded by Irish AID and over 100 corporates including ACACIA, Anglo Gold Ashanti, Bank M, Mohammed Dewji Foundation, NSSF, PPF, TIB, CRDB and Stanbic Bank. The theatres were constructed by a local construction company, namely, Emirates Aluminum and Glass Co. Ltd. Group photo: Hon. Ummy Mwalimu, Minister of Health, Community Development, Gender, Elderly and Children (Center), Dr. Ellen Mkondya-Senkoro (3rd from Left) together with representative from the Local Government and Regional Office at the handing over ceremony held in Simiyu.

The subsequent ceremony on the same day was held in Busega district at the Mkulla Designated District Hospital. Speaking as she handed over 28 health workers staff houses built in Simiyu region, Hon. Mwalimu said that, despite the Government’s effort to tackle the crisis for Human Resource for Health in the country but the shortage is still at 52% of the required workforce and situation is worse in the underserved areas. She continues that, today we are handing over 28 health workers staff houses with the aim of improving the living condition of health workers hence attract them to come and work in rural areas.

Speaking at the ceremony in Busega, Dr. Ellen Mkondya-Senkoro, CEO of BMF, said that, the 28 health workers staff houses have been constructed under Ministry of Health’s project for strengthening health system which is financed by the Global Fund to Fight against AIDs, TB and Malaria. She further mentioned that the staff houses have been constructed by a local contractor namely, Emirates Aluminum and Glass Co. Ltd under the BMF health district and District Engineer. The project costed Tshs 1.5 billion with an estimate of Tshs 52 million per house. The staff houses were built within the compounds of 14 health facilities located in three (3) districts The health facilities the benefited from the houses include, Mkula, Nassa, Lukungu, Gininiga and Badugu health center in Busega District Council;, Mwasinasi, Nyamikoma, Nyawa, Byuna and Mwasubuya in Bariadi District Council and Longalombogo, Ikindilo, Luguru, Nkoma and Zagayu in Itilima District Council

At both occasions Dr. Ellen thanked the local government authorities and the citizens for their support and cooperation during the whole period of implementing both projects until completion. 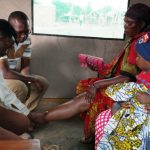 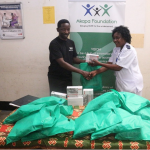