The Mkapa I knew: An Ardent Reader, A Ferocious Technocrat and a Fervent Christian

It is hard to eulogize any man. It is even harder to do so to an accomplished octogenarian,whose stature in our country but also internationally is unquestionably very imposing. A manwith whom, we worked so closely for over seven years until his very last hour in this world.What complicates even further any attempt to objectively eulogize him, as I have come to learnover time, is the fact that his charm is unapologetically infectious and difficult to repulse. Thispersonality is none other than the Late Benjamin William Mkapa, who has just been called tojoin his forefathers on that fateful Thursday night of July 23rd. That formidable task notwithstanding, I couldn’t summon sufficient zeal to remonstrate with the temptation to mourn quietly and refrain from saying anything about this larger than life figure that has given so much to me personally, to our country, the continent and the world at large.

When I finally decided to write this exposé, I was apprehensive about what I should say for asimple fact that many have already said that needs to be said about this great son of our soil.Since his passing on, score of people from all walks of life have been paying glowing tributeto this intellectual giant and a paragon of virtues in so many poignant ways. We have been receiving tributes from all over the world, each illustrating various ways in which Mzee Mkapa touched their lives positively. It is almost impossible to write something that hasn’t been spoken about but also with so much to speak about, it is easy to fall to the enticement of playing ducks and drakes with plentitude of his virtues. Nonetheless, I was intrigued to write at least write something or two about this departed patriot. I have chosen three of his attributes that I reckoned to have had profound effect in me as a person but also resonates with many. These are Mkapa as an Ardent Reader; as a Ferocious Technocrat; and as a Fervent Christian. Beforethat, let me briefly account for my first encounter with him.

Sometimes in mid-2013, while I was at the Centre for Foreign Relations in Kurasini finalizing my Postgraduate studies in the Management for Foreign Relations, I got a phone call from the then Permanent Secretary in the Ministry of Foreign Affairs Amb. John Haule who asked me to see him. Upon meeting him, he hinted to me that he had my two letters. The first one was to inform me that I have been posted to our Permanent Mission to the United Nations in New York to start my four-year tour of duty; and the second was about the promotion and appointment to serve as Personal Assistant to the Former President Benjamin Mkapa. I was perturbed, for I knew I couldn’t possibly serve both capacities simultaneously but he was courteous and frank enough to open up that It wasn’t for me to choose, but rather the decision was made already. We had a good chat that was replete with his exhortations on what this second letter entails, prospects for my career in the future; the caliber of the personality I am going serve and the imperative of making the best of time with him to learn and grow professionally. He was finally open that the first letter will be rescinded to cater to the whims of this senior citizen. I was excited not because this position comes with a hefty promotion, but also that prospect of working for such a leader with distinguished technocratic bravado of Mkapa’s caliber was gratifying.

Anyone who has ever come across Mkapa professionally is bound to be mesmerized by his masterful command of “queen’s language,” English. Many have associated this mastery to his Undergraduate degree in language at Makerere. While this may partly be true, but most of it, I would argue, is the result of his affection for reading books. He spends almost all his—for lack of a better term—”idle” time reading all sorts of books, newspapers, and magazines.

Whenever we travel, and I have had the privilege of accompanying him around the world countless times; he will ask to visit two places only, a book store and a church (If our absencefalls on Sunday). Those are the only places that he will personally visit whenever we are out of the country. He would send you to go to the shops to buy him anything except books and whenever we go to a bookstore, we were always prepared to spend from one-and-a-half to twohours, for he would carefully scour for books and read prefaces before he could drop them in his shopping basket.

His penchant for reading books never ceased to amaze me. I recall a day we were working in his home office. During our idle time, I started going through his hundreds of books. I was astonished to find a book he has bought titled, “The Dictionary of (bull-shit): A shamelessly opinionated guide to all that is absurd, misleading and insincere” authored by one Nick Webb. He noticed my astonishment and when I asked him why he would need to “waste his precious time” reading such a book, his response was quintessentially characteristic of his civil mannerism, “Macocha, knowledge also is about understanding from both ends of the intelligence spectrum.” His love for books was an open secret to all who knew him, and for this there almost everyone knew that one present that Mzee Mkapa will never turn down is a good book.

I must say I have never had a close encounter with Mzee Mkapa before joining his office as his Assistant. He became President in 1995 when I was at the University of Dar Salaam pursuing my undergraduate studies. Even when I graduated, I spent the rest of his presidency in the private sector where I was working. I must confess that my admiration for him was from
my binary impression of that technocratic demeanor he admiringly personified and his lingua oratorical eloquence. With the little I knew about him then; I also harbored an opinion many had about him being short-tempered. I also even sympathized with the few that characterized
him as somewhat arrogant. While I am no longer in concert with the former characterization, I partly agree with the later about arrogance but with a little qualification. He may appear arrogant but only intellectually and not in any other way.

Before any speaking engagement, Mzee Mkapa was always extravagant in preparations as he would expend an excessive amount of time preparing. We would spend weeks reading books, past speeches, newspapers, and magazines preparing for just one-hour of a lecture or speech. It is because of high premiums that he places on preparations that he sometimes would
inevitably feel shortchanged when confronted with unresearched and spontaneous questions about the subject matter he has spoken about. Such situations didn’t go down well with many as they would pick his disappointment from the responses he would give to such questions.
Nevertheless, I have countless testimonies, and I can bear witness myself to the fact that Mkapa was among the humblest and down-to-earth leader we have ever had.

My testimony to this impeccable quality goes on the very first day I went to report after having accepted the appointment. My appointment was to meet him in his modest office at 11 am. Knowing his almost religious punctuality, I arrived there 10 minutes before time and was ushered in at precisely 11am. I found him with my CV on his desk, and a bunch of reports that
I had written previously in the Ministry of Foreign Affairs, and all had red underlinings all over. Such in the breadth and depth of meticulousness that he embodies. After the usual niceties, his first formal statement to me was, “Macocha, you are here on merit.” I can’t remember the following conversation verbatim but It generally revolved around instilling me
some confidence to work for him. He would never judge anyone basing on anything other than his credentials. He knew everything about me, including my education, family, the names of all my kids, and what have you. Still, he never knew my religion until three months later when
in one Friday, I asked him if I can go for Friday prayer and join him afterward. That is when he asked me with almost bewilderment whether I was a Muslim. To Mzee Mkapa, I have come to know and love, my religion was inconsequential, provided I had the requisite capabilities to
discharge my duties. Mzee Mkapa was a meritocrat per excellence and considered even his assistance based on intellectual capability.

I want to boldly attribute this trait to his upbringing. Being a son of a catechist and greatly influenced by the Benedictines, Mzee Mkapa was deeply religious. His religiousness manifests itself in many ways in both his private and public life. He was extraordinarily humble and loathed personal aggrandizement to the core. He would countless times remind me of the equality of us all before God and how deceiving are these mundane paraphernalia like titles, status, wealth, and what have you. He lived this belief as he would start his day every day supplicating with a prayer from Magnificat Magazine that he received monthly from his annual
subscription. Magnificat magazine contains daily mass texts, scriptural meditations, and liturgy of the Hours prayers.

It is because of his religiousness that Mzee Mkapa was very forgiving. As a human being, you would invariably make mistakes, and Mzee Mkapa was quick to forgive. For this, I have an anecdote that I have lived with from ever since it happened. One time in March 2017, he received an invitation to attend the inauguration ceremony of the Presidential Library belonging to his long-time friend, Former President of Nigeria, H.E. Olusegun Obasanjo in Abeokuta, Nigeria. We were to travel with Ethiopian Airlines that leaves on the wee hours (I think 3 am if I am not mistaken). A protocol officer from the Ministry of Foreign Affairs that we were to travel with had all the arrangements done, including getting the tickets and our passports. Unfortunately, he misconstrued the English with Swahili time, and to that effect, he thought take-off would be 9 am, so he went home and slept.

To cut the story short, we missed the flight for we had neither passports nor tickets. Given the gravitas of leader involved, the incident was understandably escalated to the top management in the Ministry. Mzee Mkapa called me after we had ascertained what was the cause for that
mishap and instructed me to call the then Chief of Protocol and pass on his message that he had forgiven the officer for making a mistake as any other human being, and that he should not be punished. He also demanded that he travel with the same officer to Nigeria and so he shouldn’t be substituted. His instructions were heeded, and the officer lived to tell the tale.
I have had the honor to serve him for over seven years, and in that course of time, I am loaded with anecdotes, tributes, and stories to share that I can fill a book. I have had the privilege to help him leave a lifeless legacy through his memoir, which he finished and launched just in time. I draw a lot of satisfaction from his public acknowledgement my work for him in the
presence of all the living Presidents we, Tanzanians, have had. As if that was not enough, I was fortunate again in his last hour in this world to listen to his last appreciation verbally from his deathbed. I will cherish my time with him, but especially those two moments for the rest of my life.

So long, my Mzee Mkapa, may his soul rest in eternal peace. 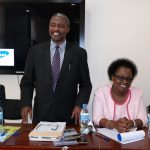 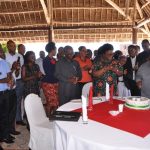 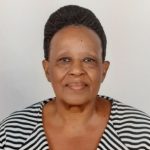