A BMF delegation led by the Chair of Board of Trustees, Dr. Adeline Kimambo; Board Member Dr. Ali Uki; Chief Executive Officer, Dr. Ellen Mkondya Senkoro and Director of Programs, Ms. Rahel Sheiza on 16th February 2021 met with His Excellency Dr. Hussein Mwinyi, the President of the Revolutionary Government of Zanzibar.

During this visit, The Chair of the Board acknowledged His Excellency Dr. Mwinyi for his Founding vision and setting a firm foundation as the first Chair of the Board of Trustees of the Mkapa Foundation, that established a strong base to the legacy of BMF to-date.

She further informed President Mwinyi of the continued vision of BMF in complementing the Government efforts geared towards improving health and well-being of people in Tanzania Mainland and Zanzibar.

H.E. Dr. Hussein Mwinyi was also made aware of the Foundation’s vision towards re-building its partnership with the Revolutionary Government of Zanzibar which had begun since year 2006. A vision that is well in alignment with the BMF Strategic Business Plan and aims to build upon lessons and best practices from implementation in the Mainland, as well as working through local priorities and building solutions with effective engagement of the local structures of ZNZ through human centered designs. The Foundation’s initial focus of this Partnership will aim at enhancing leadership, governance and stewardship in Health sector; Human Resource for Health (HRH); Health Infrastructure; Health Financing; Resilient Community Interventions/Systems and Emergency Response Initiatives, which will be carried through effective engagement of the respective authorities in Zanzibar.

His Excellency Dr. Hussein Mwinyi expressed his honor to be part of the founding governance team and acknowledged BMF’s growth and high impact that it has made in improving the wellbeing of the needy population in Tanzania. He further expressed his gratitude towards BMF re-initiated partnership with the Revolutionary Government of Zanzibar and being able to maintain the legacy of the Late Former President Benjamin William Mkapa.

He further alluded to the BMF delegation on his focused priority to reinforce the health systems and particularly to enhance a functional health financing mechanism including health Insurance in the Isles, as efforts to ensure accessibility and sustainability of quality health services and Universal Health Coverage. He expressed his willingness and commitment to support home-grown initiatives developed jointly by BMF and the Government of Zanzibar, targeting Health Systems Strengthening. He further acknowledged the current BMF support through UNFPA financing in improving quality service delivery by hiring and supporting 21 Health Care Professionals. 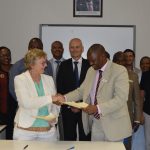 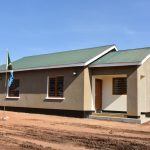 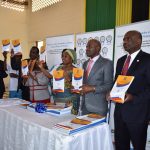