Kapela: I Felt Relieved When Health Workers Came Knocking At My Door

Mtwara: As Benjamin William Mkapa Foundation Continues to thrive deeply to make healthcare be accessible to all Tanzanian citizens. Mtwara citizens have been among the beneficiaries of the door-to-door COVID-19 campaign. Healthcare workers at Mtopwa Village in Nanyamba Town Council have been visiting households to make sure COVID-19 education and vaccination are accessible to everyone, especially to groups with special needs.

“As you can see, I am aging. I was told that a vaccine can save me from getting more serious health problems if I catch coronavirus. But at first I feared. Some neighbours were saying the vaccines are unsafe. But a health worker came to educate me about the benefits of being vaccinated’’ says Kapela who had just got his shot of the Pfizer vaccine while at his home. 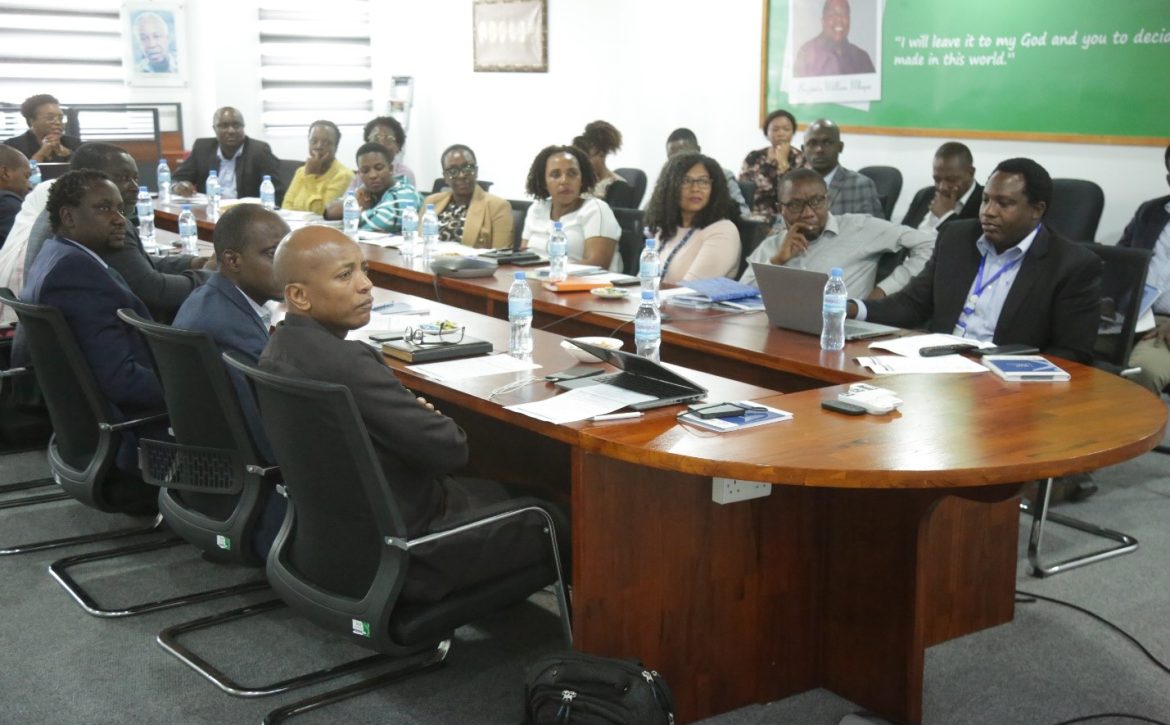 In a period of 16 years, The Benjamin William Mkapa Foundation (BMF) has sustained its complementary efforts in ensuring the health and well-being of society, particularly the underserved is achieved. As burgeoning our milestone in Tanzania Mainland and Zanzibar, The Foundation held its annual partners meeting in appreciation of the support and cooperation from the Government, Development Partners and other Stakeholders.

This meeting was held on 1st November 2022, at BMF offices at Mlimani City Office Park, Block No.6, Sam Nujoma Road, Ubungo- Dar Es Salaam, from 0930hours – 1230hours physically but also virtually for those who joined in their comfort zone.

The most crucial agenda for the 5th Annual meeting was to exchange views with the Management, learn and receive updates on the Foundation’s noble work for various milestones. Other agenda discussed were the BMF Partnerships and Potential Sources of Funding, Grants, Finance and Audit, and areas for attention, lessons learnt and the way forward.

“We value your partnership and your willingness to work with us. Your constructive ideas and advice have always been appreciated. We will continue working with you for the sustainable improvement of health services and systems in our country.” said Dr. Ellen.

On this ground, the Foundation will continue to honor the enormous support from the Government, Development Partners and Stakeholders, working continuously and tirelessly to sustain the legacy of our Founder and Settlor, His Excellency (Late) Benjamin William Mkapa. 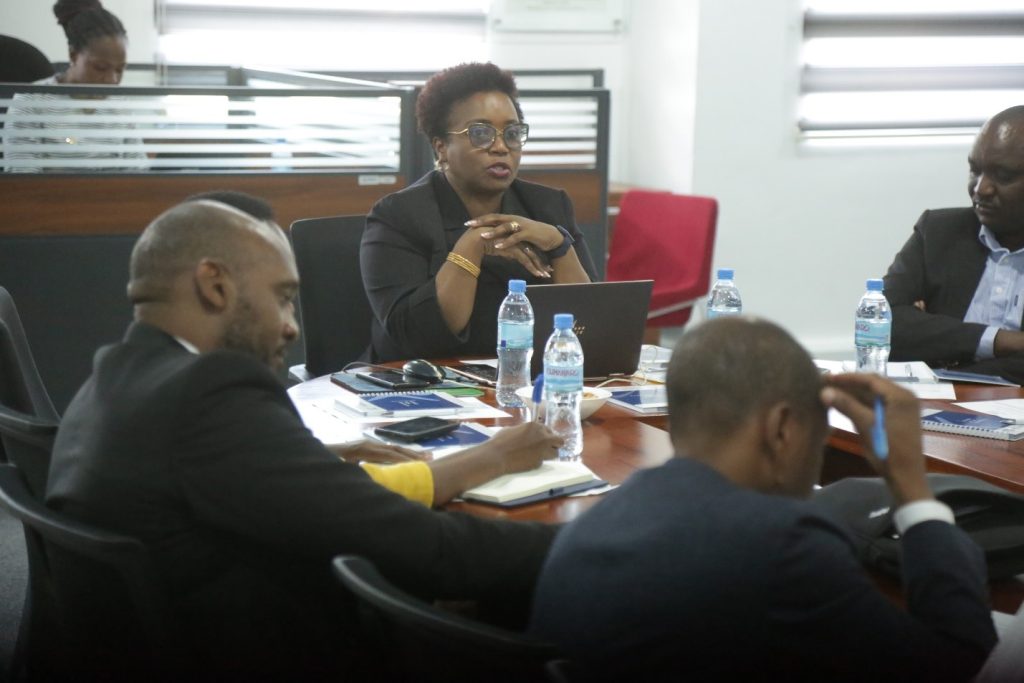 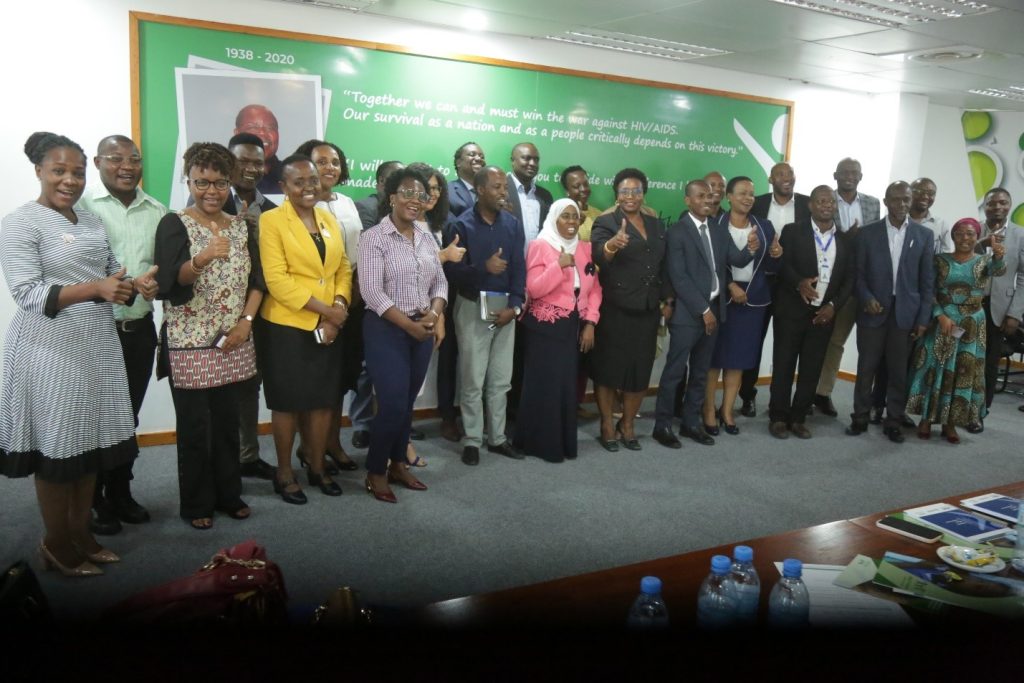 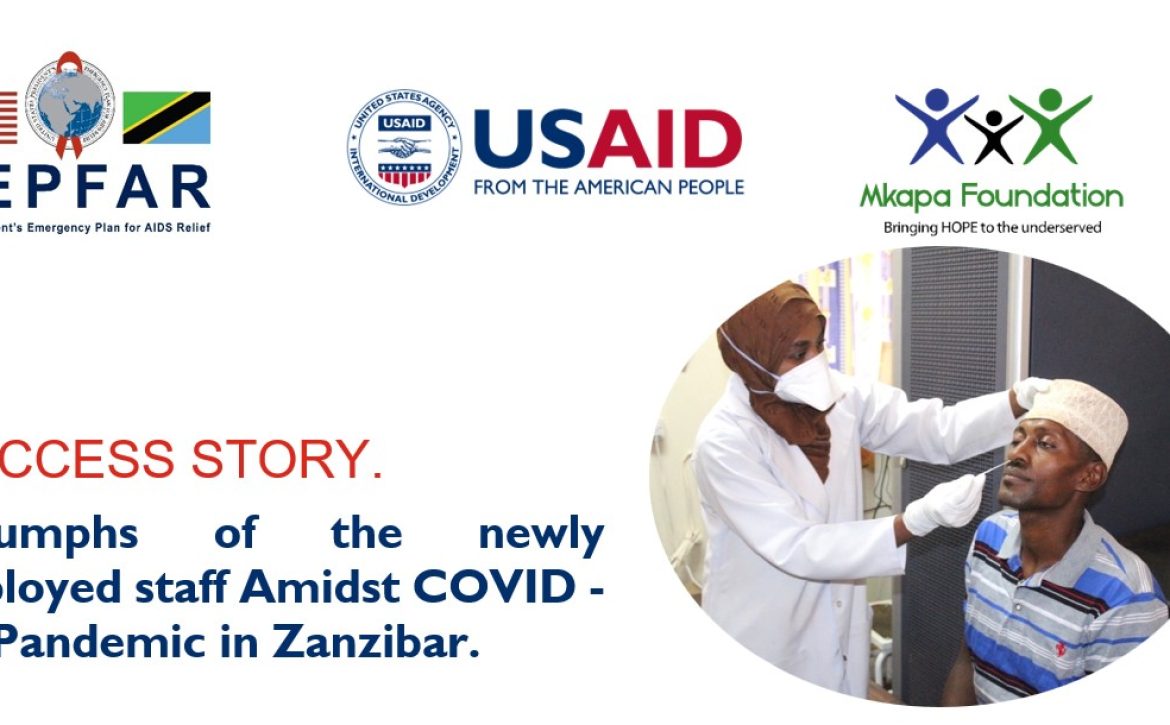 SUCCESS STORY: Triumphs of the newly deployed staff Amidst COVID -19 Pandemic in Zanzibar.

Zanzibar:  When the COVID -19 pandemic hit in Zanzibar, Makunduchi Hospital, which serves as a district Hospital in Southern Unguja, was already in a bigger challenged to conduct its routine health services due to shortage of health workforce. With only 34 (19%) available Health Care Workers out of 181 requirements, the increased flow of clients at the facility mismatches the available human resources to battle with the needs including response to COVID -19 interventions.

“We were caught at a surprise because many clients were flowing at our facility and the fact that we are serving whole district, we had to stretch ourselves with the available staff to provide better services from 8:00am until 3:30 pm everyday as we couldn’t afford going beyond late hours due to shortage of manpower.” Says Dr. Amour Muhsin Burhan, the Acting facility In-charge. Zanzibar:  It felt like an eternity, after waiting for too long to see the start of COVID-19 vaccination services at Selem Primary Health Care Unit+ (PHCU+) in Unguja—the largest and most populated Island of the Zanzibar archipelago. Then, finally in August 2021 the facility was earmarked as a vaccination center by the Ministry of Health. However, people’s hopes to be vaccinated almost vanished. No services were available as expected.

At the time, Josephine Maboko, the Facility In-charge of Selem PHCU+ was the only clinical officer available, alongside10 nurses who were providing medical services to the high volume of clients flocking to the facility.

“It was really challenging. I was the only clinician here providing routine health services, yet there were directives to provide COVID -19 services as well,’’ says Maboko. 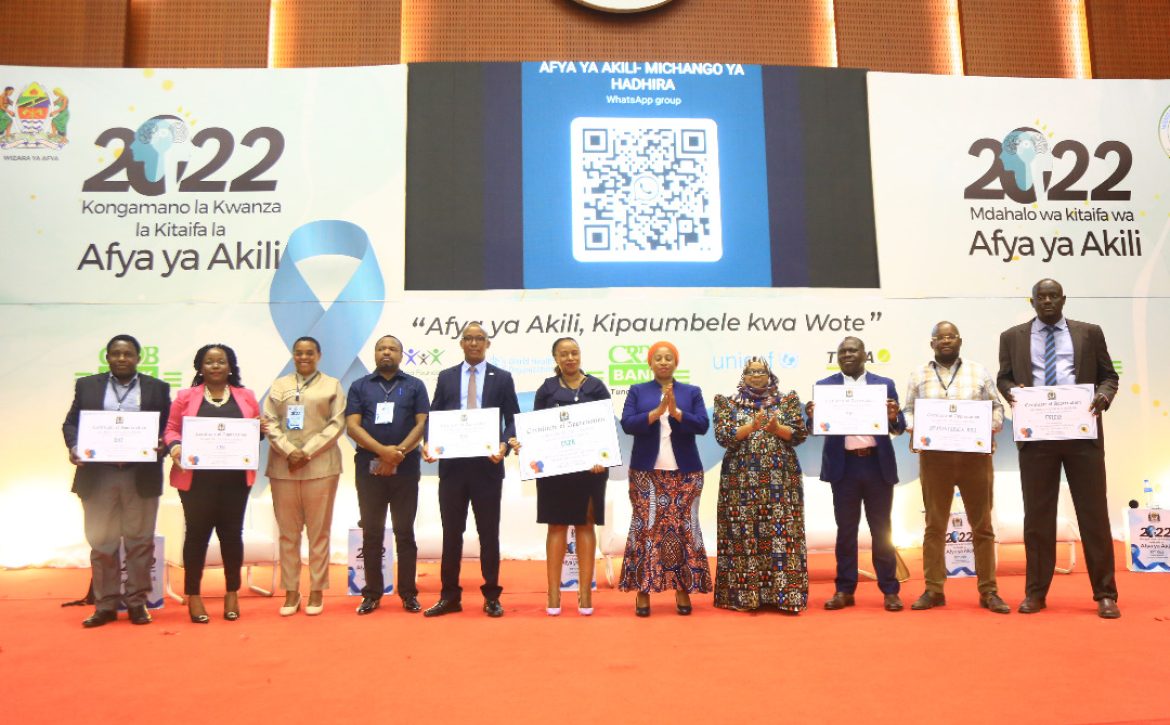 One out of eight people have symptoms associated with mental health. Based on these global statistics it is estimated that 7Milion people in Tanzania have been impacted by Mental Health Challenges. This was said recently by the Minister of Health Hon. Ummy Mwalimu at the first Mental Health Symposium to be held in Tanzania in Dar es Salaam. To mark World Mental Health Day.

This event was organized by the Ministry of Health and co-sponsored by different partners including Mkapa Foundation.

Speaking at the event; the Director of Strategy and Performance Management, from Mkapa Foundation, Dr. Mussa Ndile said that Mental Health services should be deliberately offered in the health facilities going down to the community levels. He added that Mkapa Foundation is committed to ensure that it includes mental Health interventions into its programmes.

WHO representative Dr. Zabulon Yoti pointed out that ‘There’s No mental without Mental Health’ and called for the prioritization of Mental health at District, Regional and National level?

Other stakeholders who participated were WHO, UNICEF, CRDB, MUHAS, Tanzania Non-Communicable Diseases. 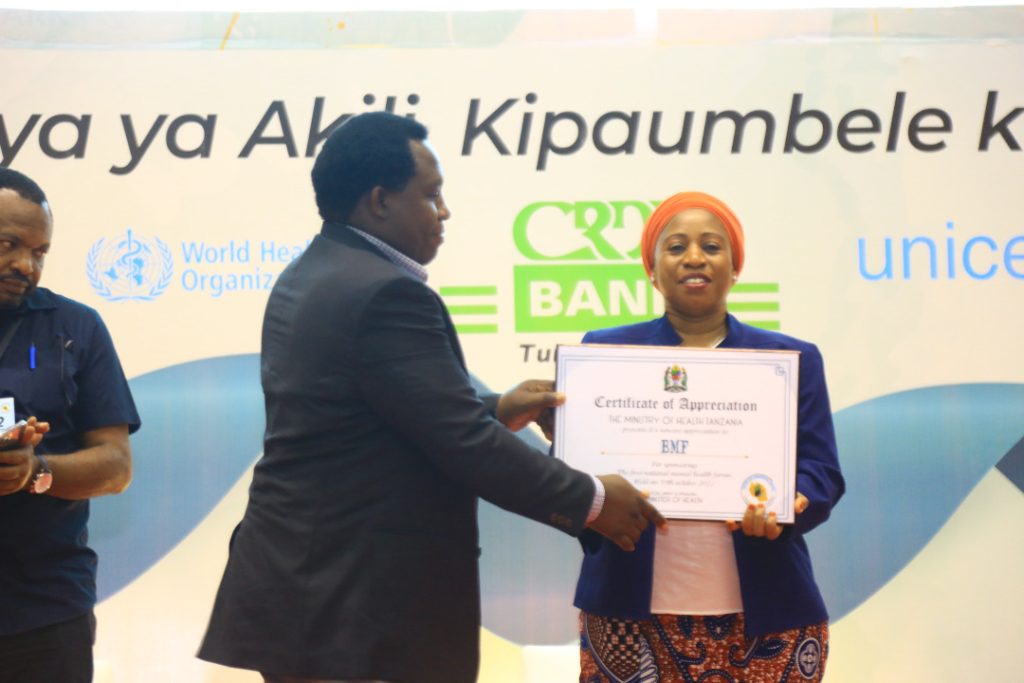 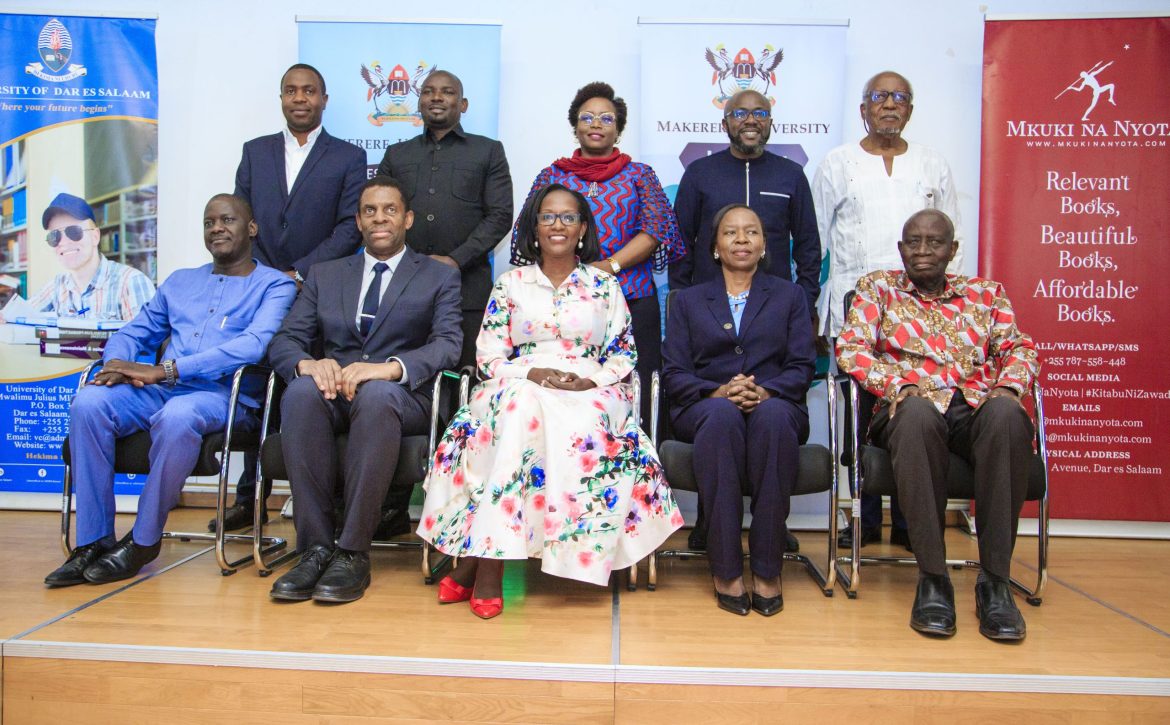 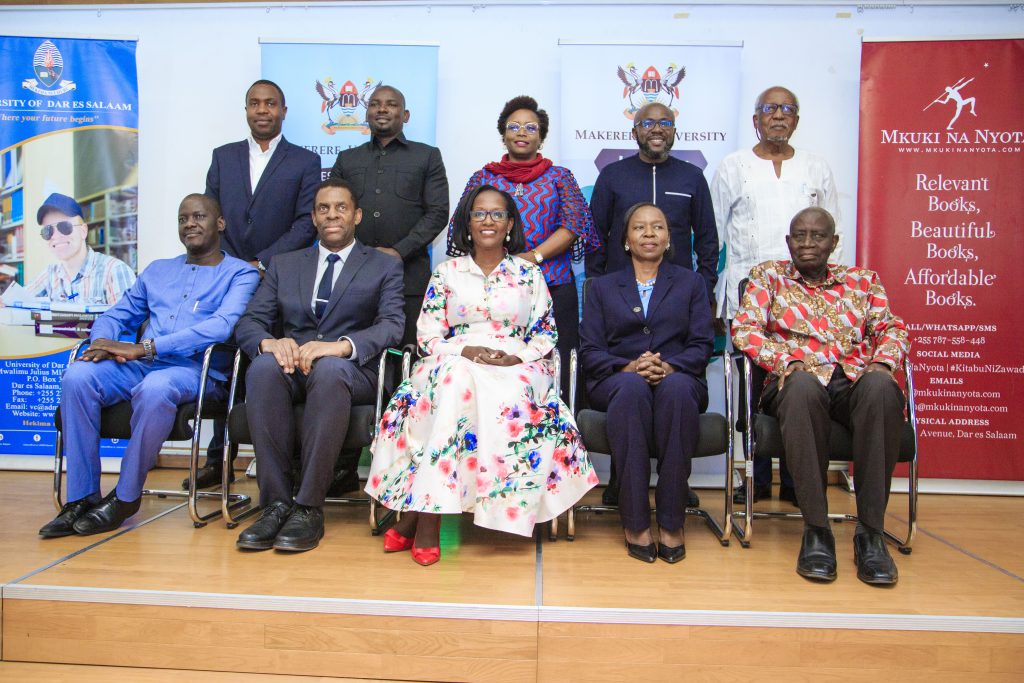 Katoro, Geita: Just a little over one year ago, if you walked into the Katoro Health Center you would have been welcomed by long lines of expectant mothers waiting for services, sadness, and worry written all over their faces. The facility was staffed with only 19 skilled health care workers inadequately to serve the growing number of about 350 clients visiting for various services per day and mostly at the reproductive and child health section.

Zanzibar. This is a story of 100 healthcare workers who were deployed through USAID Afya
Endelevu Activity in Zanzibar—from seaports to airports, hospitals and communities—and they
became a living proof of how more investment in Human Resource for Health can boost efforts to
curb a pandemic—and potentially create a health system that can withstand future pandemics. Benjamin Mkapa was a skillful diplomat

Summary
As a diplomat locally and internationally Mkapa was a respected gentleman because of his capacity, stature and ability to handle sensitive issues and that is why after retirement he was given the task alongside Kofi Anan to sort out the 2007 Kenyan post-election mess.

I joined the foreign office in 1972 fresh from University of Dar es Salaam and since then I worked at different missions with my first stint being at the embassy in Addis Ababa where I worked with Paul Rupia.

This interaction broadened my scope and sharpened my skills in the diplomatic arena, however, after that stint I later went on secondment with the UNHCR.

At that time Salim Ahmed Salim was the Minister of Foreign Affairs and he got the nod to release me from President Nyerere.

Our paths with Benjamin Mkapa crossed in 1975, I had just returned from France and he was foreign minister and we worked very closely including going on several missions across Africa and beyond.

In those early days, he played a great role in sharpening my skills because he was a very adept and skillful diplomat himself, I was rather fortunate to have learnt so much from him at that early age.

And as we all know when you are young you tend to emulate what the elder brother is doing especially when it is positive.

In early 1995, I was stationed in Mozambique with the UN and Mr Mkapa came to Maputo by then he was minister for Higher Education, Science and Technology, at that point Tanzania was preparing for the first ever elections since the return of multi-party elections.

In the conversation that ensued later after he was done with his assignment, I asked him to come home for dinner so that we can talk and plan for November. My main interest at the time was for him to go back to the foreign ministry to put things right because we believed that the ministry was not what it once was.

“Once the elections are over, let’s hope the new president will give you back your ministry,” I told him.

Little did I know that he was also aspiring to run for the presidency of the United Republic of Tanzania, to me this was also an art of some kind by keeping certain things secret until the right moment when he could divulge.

But even after he had been nominated by his party (CCM) to become the flag bearer in the October General Election, he remained the calm and simple person that I had worked with for over two decades.

In my own personal assessment, I was indeed confident that he would make it in that election and even when I visited him, I had the guts to say it to him that from the look of things, he was going to be the next president.

After he was sworn-in as Tanzania’s third President, his focus was mainly on strengthening the economy which was making a transition into the market economy and as a result, he instituted many things that has kept Tanzania on her feet to date.

This was not a simple task, because to change the mindset from Ujamaa to liberalised economy required understanding and tact on how navigate the waves at the time. This was gigantic task!

As a diplomat locally and internationally Mkapa was a respected gentleman because of his capacity, stature and ability to handle sensitive issues and that is why after retirement he was given the task alongside Kofi Anan to sort out the 2007 Kenyan post-election mess.

We thank God that the team which was composed of high profile diplomats such as Kofi Anan, Graca Machel, and President Jakaya Kikwete to avert further violence after an election that certain sections believed it was stolen.

Immediately after that task which I was part of as well, the AU, EAC and ICJLR asked him to be their special envoy to team up with former Nigerian President Olusegun Obasanjo to form a joint team to deal with another mess in Eastern Congo.

The team under Mkapa shuttled between Goma and Nairobi until the Goma agreement which was signed on March 23, 2009 in Nairobi.

In my assessment, this was a beautiful document which if the government in Kinshasa (DRC) would have adhered to then they would have achieved so much but instead Joseph Kabila’s administration reneged on its implementation.

As a result the ‘M23 boys’ said they were going back to the bush and adopting the name M23 which was the date when the agreement was signed.

Although not much was achieved out of that accord, the credit remains with the two statesmen Obasanjo and Mkapa, whose work to salvage Congo out of that darkness cannot go unnoticed.

But that was not the last time that he would negotiate settlements because he went on to do Burundi and later the South Sudan referendum.

For the 12 years that I spent with him after retirement, he always exuded commitment and desire to see peaceful settlements because as a retired head of state he could have chosen to rest in the comfort of his home and read books.

It is that same desire that saw him, probably against the expectation of many go into the dock on May 5, 2011 to defend Prof Mahalu over the events that had transpired in our embassy in Rome, Italy.

Prof Mahalu had been arraigned in January 2006 along with a former counsellor at the Rome embassy, Ms Grace Martin, on charges of conspiracy to steal from the government. Defence lawyers filed Mr Mkapa’s sworn affidavit at the Kisutu Resident Magistrate’s Court