As everyone’s death demises, the news of the death of the third phase President Benjamin Mkapa on July 23 this year came as great shock not only to Tanzanians but also to the staff of Benjamin Mkapa Foundation (BMF).

To BMF, President Mkapa was a Patron, Founder and Settlor of the organization, who played an active oversight role with his charismatic leadership style.

It was bad news to the nation especially the BMF family, when President John Magufuli announced the death of the fallen hero in the wee hours of Friday July 24, leaving the country grief-stricken and auguring in the declared seven-day national mourning.

The President announcement was followed by various activities as part of preparations for his burial. BMF board members and senior management team joined Mkapa’s family at Msasani residence in Dar es Salaam to mourn the death of their patron whose death has left them in disbelief.

The BMF also took part at the President Mkapa’s state funeral that was held at Uhuru National Stadium in Dar es Salaam before his body was flown to his native land of Lupaso for burial.

At the state funeral, President John Magufuli led Tanzanians and foreign dignitaries to pay their last respects to the late former president.

Mkapa’s body was flown to his treasured homeland where he had opted for his burial.

However, the Foundation staff were among the people who joined thousands of ordinary citizens at the Lupaso home village, packed to the brim with people from all corners of the country and beyond to pay their last respects and bury the globally hero-known Mkapa.

BMF board members and senior staff were among the few groups, who were given the opportunity to bid farewell to the departed president by laying a wreath on his grave.

“Our Settlor was a life well lived and time meaningfully spent. We thank God for the gift of his life. We pray for his eternal peace,” said Dr. Adeline Kimambo, Chair of the Board of Trustees of BMF as she offered her condolences.

“Rest in peace Mzee Mkapa, and we as the Foundation shall continue implementing your legacy,” she said. 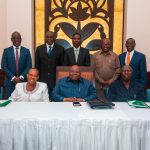