The Benjamin Mkapa Foundation has pledged to continue building on the dream and vision of its Founder and Settlor, the late President Benjamin Mkapa in order to positively impact the health sector in Tanzania and Africa in general.

In her message on the passing of President Mkapa, the Chair of the Board of Trustees of BMF Dr. Adeline Kimambo said that, his life touched many of his compatriots, and there were many more whose lives are much better today because of his life and his contribution.

“We are grateful for the gift of President Mkapa’s life to us, and to millions more others, whose lives were touched by his leadership and service,” Dr Kimambo noted.

She said President Mkapa’s vision in establishing the Foundation after his retirement from office was to promote his efforts in combating HIV/AIDS as well as reinforcing better access to health care and services for Tanzanians.

“In this regard the Foundation has had an exceptional working relationship with the government and partners in development on improving availability and accessibility to quality health care, with special focus on remote, low resource settings and underserved areas,” she said.

She further explained that in 14 years of its existence, the Foundation has successfully undertaken and implemented multiple projects that have positively improved and impacted health sector in both Mainland and Zanzibar.

“These have contributed towards the fight against HIV/AIDS, Tuberculosis and Malaria. They have also supported Maternal, Adolescent and Children Health, and as well increasing availability of skilled health workers at the health facilities, community health workers and overall improvement of health facility infrastructure,” Dr. Kimambo said.

She noted that the untimely death of President Mkapa was an irreplaceable loss to their Foundation but it gives them reason to celebrate his accomplishments and achievements.

Dr. Kimambo said that BMF will carry on his legacy by working tirelessly with the government, development partners, private sector, and the citizen to ensure provision of healthcare is improved, and people live healthy lives.

On her part, BMF Chief Executive Officer (CEO) Dr. Ellen Mkondya Senkoro said the life of the former statesman has touched and transformed the lives of millions within and outside Tanzania.

“We are proud that at his death in his 81 years, so much has been done under his able guidance, watch and enabling pair of hands. We are grateful for the trust and confidence he bestowed on us and for the opportunity given to us to help translate his vision into action and his purpose into impact,” she said.

She said BMF will continue to remember him for his fine intellectual capability, strong personal values, firm decisions and his unwavering respect for humanity and dignity, which influenced immensely their values as a Foundation.

“Mkapa will remain an inspiration to us and the successive generations of the BMF family. He will forever remain in our hearts. May his soul rest in eternal peace- Amen,” Dr. Senkoro said.

Through his Foundation, President Mkapa has left a permanent mark in the health sector that touches lives of grassroots Tanzanians, especially the decision he made while he was the president and afterwards.

On July this year the Foundation employed 575 health workers, who will be deployed in 13 regions in dire need of the staff in efforts to boost health service delivery in the country.

Since its establishment in the past 14 years, the Foundation has reached 6,773,914 Tanzanians who have benefited directly from its services, while 13,087,606 people benefited indirectly.

Through its collaboration with the government, BMF has conducted outreach services reaching more than 600,000 people who have been screened, counselled and enrolled in starting HIV/AIDS treatment.

Other services provided by the institution include family planning which has benefited 20,687 women, cervical cancer screening to 64,849 and tuberculosis screening to 40,017 people of which 1,800 were detected with the disease.

According to a report released by BMF, to date the institution has  managed to  dispatch more than 3,000 health workers in villages, where 50 percent finally secured employment in civil service. 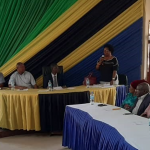 BMF JOINS HAND WITH GOVERNMENT AND PARTNERS IN IMPLEMENTATION OF HEALTH POLICY PRIORITIES SET FOR FY 2015/16 AND BEYOND.